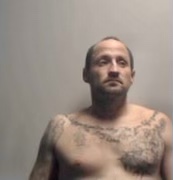 Authorities say a Mountain View man ended up in the Independence County Jail over the weekend after fleeing from law enforcement in the Sulphur Rock area.

Officers observed a vehicle Joshua James Langston, age 37, was driving had expired tags, the deputy attempted to pull him over, but Langston fled in his vehicle, reaching speeds 80 mph as it headed east on Highway 69.

When Langston was unable to negotiate a curve in the road at Magness, the suspect got out of his vehicle and attempted to flee on foot.

The police report stated Langston told authorities he fled because he had warrants for his arrest.

Authorities discovered Langston had warrants from multiple agencies, including one with the Arkansas Parole Board.

Langston suffered minor injuries in the pursuit and arrest. Authorities say he refused medical care and was taken to jail and charged with seven misdemeanors and one felony: possession of methamphetamine, less than 2 grams.