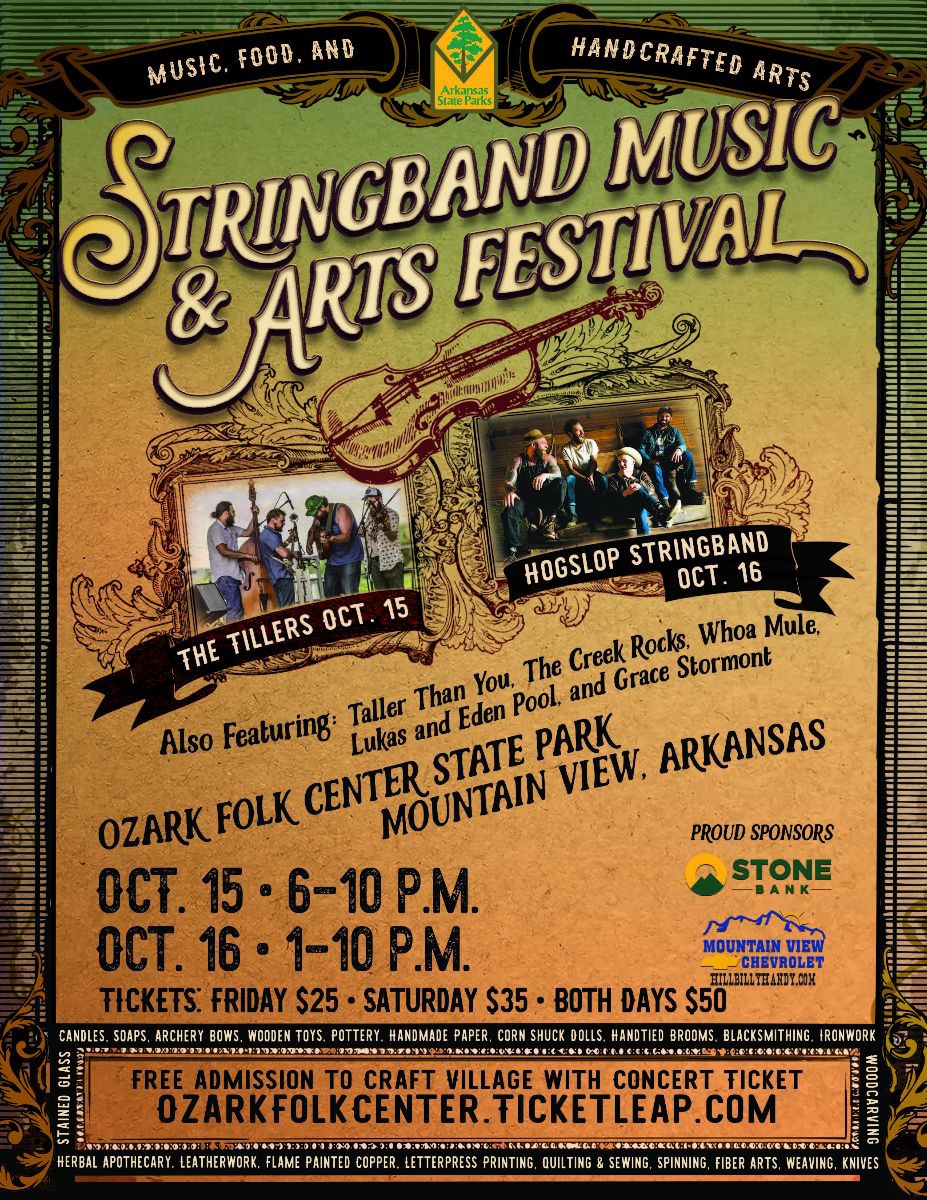 (MOUNTAIN VIEW, Ark.) – The Ozark Folk Center State Park’s Stringband Music & Arts Festival is on Oct. 15 and 16, 2021. The family-friendly festival will be a weekend-long celebration of lively stringband music and handcrafted arts featuring the Ozark’s finest artisans, music prodigies, and live performances by some of the best touring bands that play old-time mountain music, also known as Ozark folk music.

Festival featured acts include old-time music troubadours from the Ohio River Valley, The Tillers on Friday night, and underground sensations from Nashville, Tennessee, the Hogslop String Band, who will perform two sets on Saturday.

Tickets include the cost of admission to the park’s 20 artisan shops, gardens, and music shows at the park’s historic 1,000-seat indoor music venue, Ozark Highlands Theater. Outdoor acoustic music shows, programs, and artisan demonstrations will occur in the Craft Village from 10 a.m. to 7 p.m., and feature concerts will take place in the music theater from 6 p.m. to 10 p.m. on Friday, and again from 1 p.m. to 10 p.m. on Saturday.

Due to Arkansas Department of Health COVID-19 guidelines, ticket sales to music shows will be limited to one-third of the theater’s seating capacity. Tickets are $25 for Friday, $35 for Saturday, and $50 for both days. To reserve tickets or learn more, visit OzarkFolkCenter.Ticketleap.com. To book a modern, renovated cabin for the weekend, visit OzarkFolkCenter.com.

The Skillet Restaurant, also located at the state park, will serve buffets for breakfast, lunch, and dinner throughout the festivities on Friday and Saturday. The park’s hilltop restaurant, which is known for its Southern hospitality and food, will feature its famous Ozark Settlers buffet for dinner on both nights. The buffet includes chicken and dumplings, meatloaf, fried potatoes, pinto beans, turnip greens, blackeyed peas, fried okra, cornbread, rolls, and a salad bar stocked with fresh local produce.  The cost for The Skillet’s all-you-can-eat buffet is $10 for breakfast, $11 for lunch, and $12 for dinner.

“It’s so refreshing to have live music back at the park after such a long hiatus,” said Ozark Folk Center State Park Music Director Daren Dortin. “It was great to see so many smiling faces in the music theater during our August bluegrass festival and we’re looking forward to welcoming stringband music fans back for this new festival.  We have an immensely talented group of local and nationally-touring bands that will be performing Oct. 15 and 16.”

The Hogslop String Band was formed in 2009.  Since then, the band has won every major stringband contest in the South and even made the Guinness Book of Records for hosting the world’s largest square dance in 2015. Their last appearance at the Ozark Folk Center in 2016 earned them an ardent following of local musicians, dancers, and old-time music fans after impromptu dancing broke out in the music theater. Despite having to cancel their last show at Ozark Folk Center due to COVID-19, the young, energetic quartet featuring fiddle, washtub bass, guitar, and banjo will return to the Folk Center stage for two shows on Saturday, October 16, for one of the park’s most anticipated concerts of the season.

The Tillers have been thumping their own distinctive sound of stringband style folk music for a decade, riding it all over the country and across the sea. Four studio albums and one live record have won them praise as modern folk storytellers of the national soundscape.  This quartet of passionate American songsters and stringband musicians from the Ohio River Valley are sure to have you singing along and clapping along with every note.

Ozark Folk Center State Park Interpreter and jig dancer Keith Symanowitz said, “If you like foot-stomping, high-energy mountain music like I do, you won’t want to miss the Hogslop String Band on Saturday and The Tillers on Friday. You’ll also want to bring your dancing shoes!”

The festival lineup also includes some of the Ozark’s most popular stringbands, as well as young music prodigies, elder statesmen, and rising stars from the old-time music scene in Mountain View. Bands include Taller Than You, The Creek Rocks, Grace Stormont, Eden & Lukas Pool, and Whoa Mule.

Taller Than You are an up-and-coming 5-piece stringband based out of Mountain View. Since winning the award for Group of the Year at the Ozark Folk Center in 2019, this group of young all-stars has performed their original arrangements of upbeat fiddle tunes and timeless folksongs across Missouri and Arkansas.  Taller Than You which features Gresham McMillion on upright bass (commonly known as “bass fiddle” in Mountain View), Chandler Spickes on guitar, National Hammered Dulcimer Champion Ben Haguewood, Arkansas Fiddle Champion Kailee Spickes, and State Banjo Champion Grace Stormont, and will perform on Friday & Saturday during the festival.

The Creek Rocks are known for their impeccable harmony singing, songwriting, and original renditions of classic country, bluegrass, and forgotten Ozark folksongs. The band, which was recently featured on the cover of Acoustic Guitar Magazine, includes Mark Bilyeu, lead vocalist and guitarist from Springfield’s wildly popular folk band, Big Smith, and Little Rock’s own Little Rock’s Cindy Woolf, a gifted three-finger style banjo picker and singer. The Creek Rocks will be joined by friends and special guests to perform on Friday and Saturday.

Grace Stormont is an accomplished banjo player, singer, multi-instrumentalist, and rising star from the Mountain View area.  Despite her young age, 20-year-old Stormont performs with the skill and maturity most seasoned musicians only aspire to; skills she honed over the past five years playing regularly at the Ozark Folk Center. In 2021, Stormont took home two awards at the Arkansas Country Music Awards including Acoustic Act of the Year and the highly coveted award for Songwriter of the Year. Stormont’s performances include turn-of-the-century acoustic jazz, American folksongs, centuries-old ballads, and lively old-time banjo tunes. Grace will perform on Friday and Saturday of Stringband Festival as a solo performer and with the band Taller Than You.

Eden & Lukas Pool met while pursuing a degree in fiddle and banjo at the renowned Berklee School of Music in Boston, Massachusetts.  This young husband-and-wife duo has developed their own unique style of playing and arranging old-time tunes with a beauty and precision that surpasses many of the nation’s top touring bands.  When they’re not spending time at their farm in Mountain View with their horses, chickens, and two-year-old girl, Lukas and Eden teach and perform at old-time music festivals across the country. Their performance on Friday, October 15 will be their first live performance since February 2020.

Whoa Mule is one of Mountain View’s longest-running old-time music groups. This endearing band of musical brothers (from different mothers) is chock full of humorous Ozark tales, stories, and timeless folk, country, and bluegrass-inspired songs. If you like authentic mountain music, you won’t want to miss these elder statesmen of Ozark music on Saturday, October 16.

The Ozark Folk Center State Park, located in Mountain View, Arkansas, is open seasonally for you to explore the culture of this beautiful region. The mission is “to perpetuate, present and promote the Ozark way of life in an educational and enjoyable manner.” The Craft Village has over 20 Craft Artisans demonstrating and teaching their arts and is home to the nationally recognized Heritage Herb Garden. The park celebrates its folk music roots through Ozark Highlands Radio, a nationally syndicated radio show, live music in the Craft Village, special musical events, and concerts. Relax and enjoy your stay at one of our 53 cabins nestled in the woods and award-winning Southern cuisine at the Skillet Restaurant. Also available on-site is a conference center and meeting space for groups of all sizes. To learn more information about upcoming events, register for craft classes, or book a cabin for your next retreat, visit OzarkFolkCenter.com.

The state parks have 1,800 campsites, 1,050 picnic sites, 208 cabins, five lodges, and 415 miles of trails. Eight million visitors annually come from all regions of the country. Park staffs provide over 42,000 education programs, activities, and special events to more than 700,000 participants each year.

Established in 1923, Arkansas State Parks preserve special places for future generations, provide quality recreation and education opportunities, enhance the state’s economy through tourism, and provide leadership in resource conservation. Connect with us on Facebook, Instagram, Twitter, and visit ArkansasStateParks.com and ArkansasStateParks.com/media to learn more about everything we have to offer.

Imboden Live is a hometown owned and operated online newspaper,  documenting and celebrating  life in small town america. Located in Imboden, Arkansas we strive to provide local residents and surrounding areas with a quality online resource for  news commentary and  information.