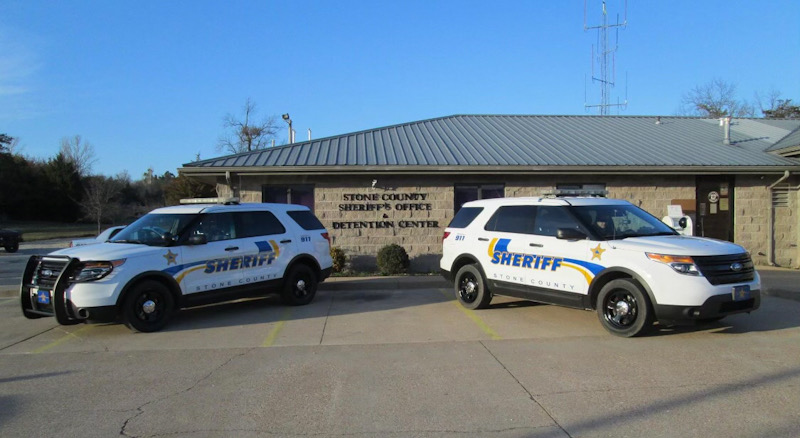 Members of the Sheriff’s Department and 16th District Drug Task Force also executed a search warrant on Luber Cutoff Road in Stone County.  Crystal Meth, drug paraphernalia, firearms, and a stolen car was seized from the location.  The car was reported stolen out of Texas.  Three people were arrested at the location.
Braxton-Joe JOHNSTONE, age 21, of Mountain View was arrested for possession of crystal meth less than 2 grams, maintaining a drug premises, and possession of drug paraphernalia.  He is charged with a “C” Felony, “D” Felony, and an “A” Misdemeanor.
Emily L. TRAMMELL, age 31, of Stone County was arrested on a Felony Charge for Theft by Receiving.  She admitted to stealing the vehicle in Texas and may possibly have pending charges out of Texas.  She is charged with a Class “C” Felony.
Jim Wayne DAYBERRY, age 35, of Mountain View was arrested for Parole absconding.  He was also in possession of approximately 18 grams of Crystal Methamphetamine.  He is being charged with Possession of Crystal Methamphetamine over 10 but less than 200 grams with the Purpose to Deliver and being a habitual offender.  That is a Class “A” Felony.
Summary of Wednesday:
The total amount of Crystal Meth that was taken off the street in Stone County on Wednesday was approximately 268 grams, (Over a Half Pound of Crystal Meth).  Street value of the meth if separated and sold by the gram is valued at $26,800.  Deputies also seized firearms, two vehicles, and approximately $2,667 in cash of profits and proceeds from the sale of crystal meth.  The 16th Drug Task Force and prosecuting attorney’s office is assisting in the confiscation procedure.  Investigators also recovered a stolen 2009 BMW Sedan.  The vehicle is being returned to the owner in Fort Worth Texas.  “I’d say, it was a good day in Stone County”, stated Chief Deputy McGilton.  He would like to thank the 16th Judicial Drug Task Force for their hard work and dedication to this community.