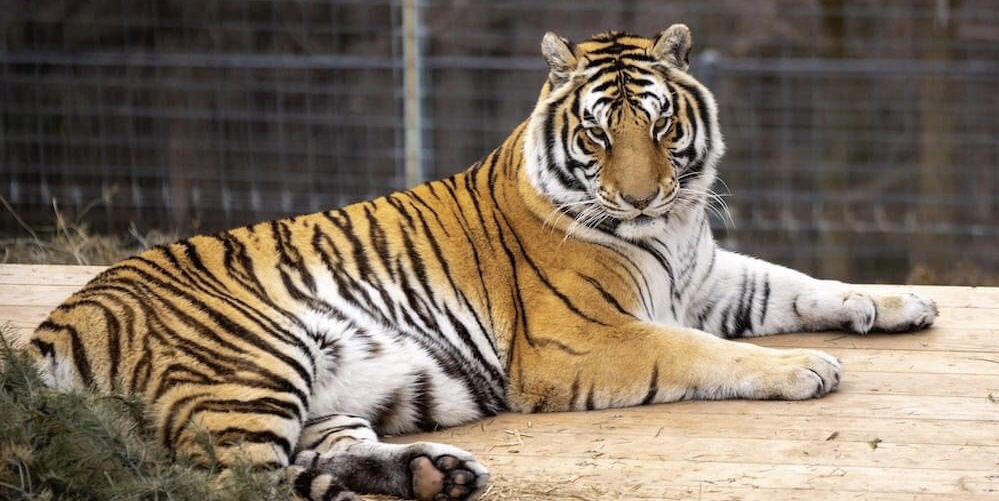 Turpentine Creek Wildlife Refuge [TCWR] assisted the Federal Government in rescuing
sixty-eight big cats from Jeffery (Jeff) and Lauren Loweâ€™s Tiger King Park previously owned by so-called â€œTiger King,â€ Joe Exotic.
In January, a federal judge ordered the Lowes to surrender all big cat cubs in their possession under the age of one-years-old, as well as the mothers of the cubs, to the government, who has worked with sanctuaries and other animal welfare agencies to find safe homes for them. This comes after the judge â€œfound that the United States had a likelihood of success on the merits of its claims that the Lowes had violated the Endangered Species Act, as well as the Animal Welfare Act.â€
A press release from the Department of Justice [DOJ] listed that, â€œfailure to provide safe conditions, proper nutrition, and timely veterinary care resulted in harm to a number of animals, including the death of two tiger cubs less than a week apart,â€ and that the Lowes had a â€œpattern and practice of providing substandard careâ€ to animals at their park. The release also noted that the Lowes put their animals in danger, under the Animal Welfare Act, by failing to have a qualified attending veterinarian employed at the park.
Last week, the remaining Big Cats (of various ages and species) were seized after the Lowes were deemed non-compliant with court orders to increase the quality of care they were providing their animals. This was following three inspections since December 2020, which concluded the Loweâ€™s failed â€œto provide the animals with adequate or timely veterinary care, appropriate nutrition, and shelter that protects them from inclement weather and is of sufficient size to allow them to engage in normal behavior.â€
Turpentine Creek Wildlife Refuge was contacted by the DOJ to assist in the rescue. Team members made two trips to Oklahoma, bringing back 13 animals total. They assisted in the transport of 8 animals to other GFAS-accredited sanctuaries and facilitated the placement of other felines at refuges within the Big Cat Sanctuary Alliance [BCSA]. The BCSA is comprised of accredited sanctuaries who are working together to rescue big cats in need and advocate for the betterment of their futures.
The twelve big cats (which include lions, tigers, a liger and a li-liger) and jaguar are undergoing medical examinations by TCWRâ€™s, staff veterinarian.
TCWR President Tanya Smith, who has been silently working with the DOJ and BCSA for months to facilitate the rescue, says she is grateful the animals are safe at proper facilities now. She views the Courtâ€™s ruling and DOJâ€™s recent seizure as a win not only for the 68 big cats directly affected, but also for other big cats who may benefit from the precedent set by this case.
Please consider making a donation to support the cost of the rescue. You can support the start of their new lives by making a donation at tcwr.org/donate.
Turpentine Creek Wildlife Refuge is an animal sanctuary accredited by the Global Federation of Animal Sanctuaries. As a â€œtrue sanctuary,â€ they do not buy, sell, trade, or breed animals, but rather, provide a lifetime home to animals who have faced non-conservational for-profit breeding and other forms of abuse at the hands of private owners. Aside from providing the highest of care for the animals that find their forever home with them, key aspects of their mission includes education and advocacy with a goal of â€œending the Big Cat Trade in our lifetimeâ€ and as a result, ceasing the need for places like the Refuge to even exist. TCWR has been a voice for animals for almost 30 years and has spent years advocating for the passage of The Big Cat Public Safety Act, H.R. 263 S.1210.
For updates on the new rescuesâ€™ journey, please â€œLikeâ€ Turpentine Creek Wildlife Refuge Facebook, follow them on Instagram and Twitter @turpentinecreek, subscribe to their Youtube channel, and sign up for their weekly e-newsletter at tcwr.org/subscribe.

About Turpentine Creek Wildlife Refuge
Founded in 1992, Turpentine Creek Wildlife Refuge is a 501(c)(3) nonprofit organization and rescue operation protecting survivors of the exotic animal trade. The 450-acre refuge, located 7 miles south of Eureka Springs, is also an ethical animal tourism destination and a â€œTop Tenâ€ family friendly attraction in Northwest Arkansas. The organization does not buy, sell, trade, loan out or breed their animals, and they do not offer cub petting or harmful pay-for-play opportunities.
They are accredited by the Global Federation of Animal Sanctuaries, a member of the American
Association of Zoo Keepers, and licensed by the USDA and Arkansas Game and Fish. Their mission is to provide lifetime refuge for abandoned, abused, and neglected “Big Cats” with emphasis on Tigers, Lions, Leopards, and Cougars.